Back in 2015 I wrote about the concept of artifact gear and how its grindiness worried me. Nearly two years later, I finally maxed out my cleric's main hand weapon. By now I honestly wasn't sure it was ever going to happen! 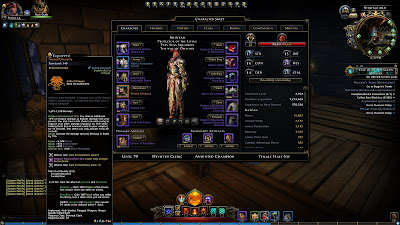 But don't worry about me running out of things to grind for, there's still her off-hand, the belt and four artifacts to go, not to mention that none of my enchantments are above rank 10...
Posted by Shintar at 22:45 No comments: Links to this post 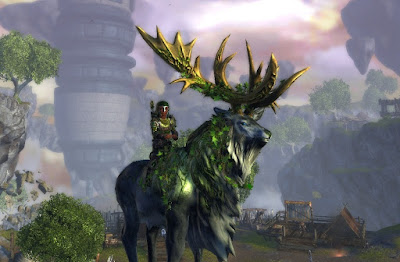 The Sylvan Stag is an old mount, added to the game way back during the Sharandar campaign, but it was the first and only lockbox mount that I recall ever actually wanting. Not enough to actually take part in Neverwinter's lockbox shenanigans, mind you - and the price on the auction house was always prohibitively high for a casual player like me.

The recent appearance of these stags in Nostura's Forest reminded me to have another look to check the current rate they were going for, and lo and behold, they were only a fraction of what they used to be! Still by no means cheap, but affordable even to me, so I finally gave in and purchased one. I decided to give it to my hunter ranger since that seemed most thematically appropriate, and my cleric main has enough other mounts that suit her anyway.

The only thing that remains mysterious to me is why the price has dropped so much. A (very) cursory Google search seemed to indicate that a lot of previously rare mounts and companions have been added as (also rare) reward drops to dungeon and skirmish chests, which would certainly explain it. Good times for me in any case.
Posted by Shintar at 22:00 2 comments: Links to this post

Boons in Neverwinter are an interesting concept. Basically they are a way for you to keep gaining power at max level beyond upgrading your gear, by permanently adding to your character's stats and abilities. You usually get to choose from one of several boons upon completing a certain amount of campaign tasks. Some of them are fairly mundane, such as "you gain 2000 extra hitpoints", while others can involve interesting procs along the lines of "every time you get hit in combat, you have a chance of striking your opponent with a bolt of lightning".

One the one hand, this is a neat form of progression beyond merely grinding for gear, but on the other hand it's not very alt-friendly, considering that there are more than half a dozen endgame campaigns in the game by now and each one is supposed to take you about a month to complete. None of my own alts have finished more than a couple of those campaigns for example.

Cryptic does actually offer a way of catching up more quickly... but it's via buying campaign completion from the cash shop. I'm sure that those who are heavily invested in the game and enjoy running endgame on alts are grateful to have an option at all, but it is yet another thing that adds to the game's pay-to-win flavour.
Posted by Shintar at 16:46 No comments: Links to this post