A couple of weeks ago I finally got artifact weapons for my max-level alts. 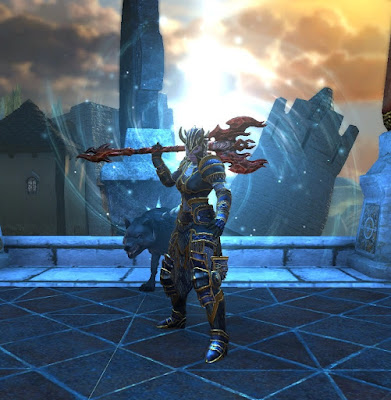 Artifact gear was apparently introduced during Tyranny of Dragons (when I wasn't actively playing). It's a simple concept: Instead of continuously replacing your gear, you keep the same item but upgrade it by pouring resources of some kind into it. Many other MMOs have similar systems, and even Blizzard is planning to introduce its own version in the upcoming Legion expansion for WoW.

It sounds cool in theory, but I've not been particularly enamoured with Neverwinter's implementation. The problem is that it's just another grind in an already very grindy game. Now you don't just have to upgrade your artifacts and enchantments, but also your weapon, your off-hand, your cloak, your belt... or you can pay your way to better gear by buying lots of refinement points of course!

People like to rail against the RNG of getting upgrades from boss or chest drops, but a predictable but endless grind is not really my cup of tea either.
Posted by Shintar at 20:27