My pet tank has been excited about this module for months, since he loves building up bases. I warned him that it probably wouldn't be all that, especially for a mini guild like ours, with only 2-4 active players. 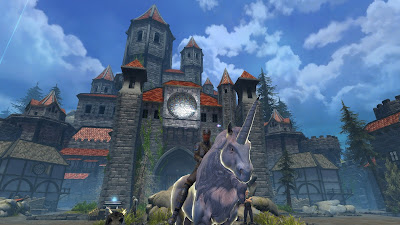 Now it's out, and it seems that I was right. Similar to a fleet starbase in STO, a guild stronghold requires the guild members to submit various currencies and resources to upgrade it. While the basic stronghold is free and the first building can be put up pretty much immediately, the second one already looks like it would take us about a hundred days or more to build, based on the limited amount of currency you can earn per character per day.

On the plus side, it's a new and pretty sizeable adventure map, and the smaller heroic encounters on it can be completed even by our tiny group. It does make me wonder how busy this map could potentially get in a large guild.
Posted by Shintar at 19:45