I realised that I never actually gave my opinion on the Underdark module, even though my pet tank and I actually played through its story shortly after it was released, so here goes:

Cryptic made a big deal out of the fact that they had managed to get R. A. Salvatore to write a storyline for them, and even though I've never read any of his books, I thought it was immediately obvious that the Underdark story was very different from their usual fare. Aspects of D&D were referenced that had never been mentioned in Neverwinter before, and there were some interesting twists and turns. Even the voice acting seemed a bit better than usual, though dwarf accents seem to be doomed to be terrible no matter what. 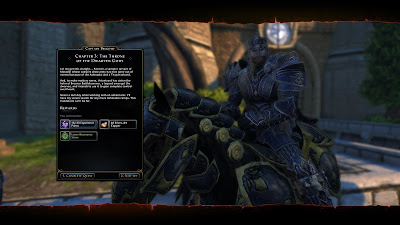 I also liked the small hidden achievements in the various chapters, such as waking up a passed out, drunken orc by poking him. My favourite character was probably Captain Belgold, the guy that hands out all the different chapter quests, simply because his dry sense of humour cracked me up. The decision that one playthrough would also unlock the campaign for any alts also seemed very generous.

My only issue was that it was way too easy to burn through the whole thing in one night and then be left with nothing but a stupid grind for the rest of the campaign.
Posted by Shintar at 21:38