More than a month after its release, I've finally started the new Storm King's Thunder campaign. So far I'm liking what I see. Both the maps and the overall style seem to be quite similar to the original Icewind Dale, which is a good thing in my eyes.

The music and overall theme are just a bit sadder, what with all those flash-frozen citizens everywhere. It would be nice if they could all be thawed out at the end of it all, though I consider that highly unlikely. 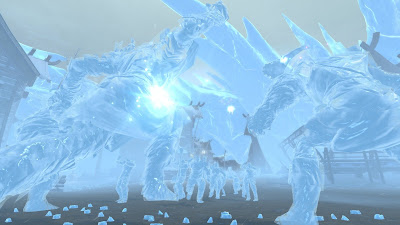 I was also somewhat reminded of the Thunderfall area in WoW's Storm Peaks, which is also filled with NPCs that were frozen mid-combat.
Posted by Shintar at 15:25