While I've been avoiding epic dungeons and skirmishes after some bad experiences, my pet tank keeps trying them. Last night he was in Valindra's Tower with a guildie, wiping once again. Looking over his shoulder, I noticed that their group was one player short, so I thought I'd surprise them by jumping into the queue on my rogue. If they were that desperate for a fifth, even my poor dps would be an improvement! But I got no pop.

"Try your cleric," my pet tank advised after I had told him what I was trying to do. Aha! On my cleric I got a pop instantly, for a group of four people trying to fill that last spot. So I joined - and landed in a completely different party about to engage the first boss. Oh. Since I hate dropping from groups for no good reason, I thought I'd see what this dungeon was all about.

Having never been to Valindra's Tower before, I ran in circles while the rest of the group killed the first boss. Eventually I managed to catch up though. Everything died really quickly, apparently because we had an amazing great weapon fighter in the group who did twice as much damage as the entire rest of the group combined (something like seventy million over the course of the run). Soon we were done. Meanwhile, my pet tank's group was still wiping and still one person short.

I tried my rogue again. After a few minutes, I got a pop - this time for a completely fresh run. This one, too, contained a seventy-million-damage great weapon fighter who made the whole thing a breeze.

My pet tank's group eventually had to give up. The queue system seemed to have bugged out and was refusing to give them a fifth party member, and they just kept wiping on the last boss (Valindra herself). He then told me that this had been his fifth attempt at this dungeon and that he had yet to complete it even once. While I had just bumbled in like a clueless idiot and got carried to completion twice within an hour. Oops?

Hey, at least both of my characters got silly hats out of it. Behold the horned cleric! 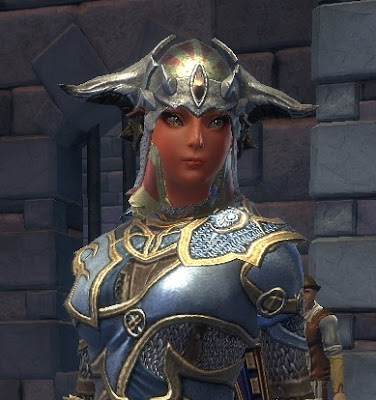 Life After the AD Changes

Cryptic implemented the announced changes to the leadership profession and to astral diamond gains a little less than two weeks ago.

The leadership changes were a typical Cryptic hack job - they literally just removed astral diamonds from all the missions that gave them as a reward and didn't replace them with anything worthwhile. (I think some of the missions had their XP output increased, but who does leadership for the XP?) The result is that there are a lot of high-level missions now that are very much not worth doing as they simply offer no worthwhile reward whatsoever, while often taking twice as long as comparable low-level missions. There's also at least one rare mission that does still reward AD, which might have been an oversight.

On the plus side, this has inspired me to start levelling some other professions which I never paid much attention to previously. I'm not sure if anything good will come of any of it, but if nothing else it might allow me to unlock another profession slot.

The demand for astral diamonds on the ZAX has remained high, so that one Zen is down to being worth less than four hundred AD by now - never thought I'd see the day.

At least Cryptic took the effect on the economy into account fairly quickly and drastically slashed the prices of marks of potency, which are one of the main astral diamond sinks in the game (they are an expensive reagent required to upgrade high-level enchantments and gear).

I haven't done any dungeons or skirmishes in a while, so my max-level characters are down to an astral diamond income of 3000 per day, which is exactly what they get from invoking six times a day. For the moment that's enough for me since I don't have any major outgoings, but I don't know what I will do when/if the day comes where I find myself running out of in-game currency.
Posted by Shintar at 19:00 No comments:

Last time I posted about my guild's stronghold, we still seemed to have some ways to go to unlocking our second building. However, my pet tank decided to plunder his old main's campaign currencies (since he switched to playing his paladin as his main) and apparently that was enough to push us over the edge. (I still suspect that there were some real money purchases involved somewhere...) 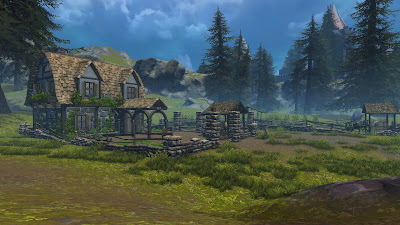 So now we have a farm, which produces food, which in turn serves no other purpose than to power the creation of even more stronghold buildings.

The next building however is the one that really interests us: the market. I don't think the NPCs there will sell us anything interesting at level one, however just having a vendor inside the stronghold would be nice, as a lack of somewhere to sell things has been the one major drawback of using the stronghold as a hub so far.
Posted by Shintar at 21:51 1 comment:

I don't like action combat. How come I'm playing Neverwinter? Well, I like a lot of other things about it, and I spend a lot of time pretending that it doesn't have action combat. Which is to say that about 90 percent of my play time is spent grouped up with my pet tank. He holds things (more or less) in place, and I do some damage from behind the mobs or from a bit of a distance, so I don't have to move too much.

Soloing however tends to leave me frustrated after a while. Today I finished Drowned Shore on my control wizard alt and while things had generally been going OK until then, the final boss of the zone killed me five or six times before I got him down. It was always the same thing: one of his red circles one-shotting me. I didn't have a problem dodging out of them as long as it was one on one, but whenever he summoned adds I would inevitably end up getting distracted by them at a crucial moment and boom! Back to the campfire, time to start over again.

Even a lot of the harder content in a game like SWTOR feels positively forgiving when compared to such one-shot abilities in what's supposed to be regular old solo content. But where other people enjoy this challenge, I've never been good at twitchy combat and just find it exhausting.
Posted by Shintar at 21:53 2 comments:

The Zen and astral diamond exchange (ZAX for short) has been in a weird place for a long time. Cryptic put a hard cap of 500 on how many astral diamonds you could buy for one Zen, but this hasn't matched up with supply and demand in a long time. The end result was that any Zen that was being sold was snatched up pretty much instantly, while there was always a backlog of millions of astral diamonds waiting for buyers (because they could only be sold at a rate that most buyers would have considered unfavourable).

The leadership changes announced on the forums aren't even live yet and already panic buying has set in. People ask themselves where all their astral diamonds are supposed to come from in the future. Within two days the entire backlog has more or less disappeared as people are trying to buy up AD while they are still available.
Posted by Shintar at 18:04 No comments:

No More AD From Leadership

General chat caught my eye today because people were arguing about a change that had been announced on the forums but nowhere else so far: the removal of astral diamond rewards from the leadership profession (and the foundry).

The driving force behind this is an unbalanced economy caused by "AFK-playing" and botting. Leadership rewards astral diamonds just for logging in and pressing some buttons, and Cryptic wants to stop that. In fairness, some players have taken this to pretty insane levels, farming leadership on fifty alts or even multiple accounts. Cryptic wants people to gain AD by actually playing the game, and I can't blame them for that.

However, I still think that the proposed changes are terrible, because after this the only ways of gaining astral diamonds will be dungeons, skirmishes and PvP (plus the pittance you get from invoking these days). But that's only a small part of the content! In practice this means that a lot of players will effectively have no source of AD anymore.

Take me as an example. I've found dungeons and skirmishes at max level to either be extremely dull or unforgivingly hard to the point that they are a pain to do in pugs. And PvP in this game is terrible in my opinion. Nonetheless I rack up a considerable amount of hours playing each week: I do dailies in the campaign areas and work on my guild's stronghold. None of this awards astral diamonds. If anything, things like unlocking campaign boons and upgrading your stronghold cost AD. Where is that currency supposed to come from in the future?

This seems like another one of those changes that hasn't really been thought through at all, or is simply driven by blind greed. ("If we minimise the ways of gaining currency in game, people will spend more money, right?")
Posted by Shintar at 20:42 4 comments:

Even though my mini-guild's stronghold still only has one building, we've grown strangely attached to it. It may be decrepit and low level, but it's ours. The heroic encounters are easy compared to the stuff in Icewind Dale and even many of the larger ones can actually be completed by a group consisting of as few as two or three people. They are fun and sometimes even quite rewarding.

It's also given us a new goal to work towards, erecting that second building (the farm). On weekends we group up and run dailies en masse to fill the guild coffer. Surprisingly it has turned out that it's not the unique stronghold currency that's holding us back (though it does take time to accumulate enough of it) but rather the amount of different campaign currencies that you have to pay in. We just don't run that many dailies, and more importantly, on some characters we actually still need the currency to advance the campaign itself and can't really donate it to the guild instead.
Posted by Shintar at 10:49 No comments: