We finished chapter five of the Cloaked Ascendancy story today, and while there is still the quest to do Spellplague Caverns, I think the main arc is pretty much over. While I consider the River District a great new map, the story accompanying it has struck me as very lacklustre. I don't expect a particularly high standard of storytelling from Cryptic, but I know they can do better than this.

It started off interesting enough: Who is this Gyrion? And Lord Neverember grousing about how ungrateful people were towards him was pretty hilarious. For a moment I wondered whether he was about to go rogue or something, but the actual reveal was fine too.

But the whole thing with Celeste was really badly done. When she "changed sides", she looked like she was being mind-controlled or something and it just felt wrong that nobody seemed in the least concerned by this! When it was revealed that she had only gone undercover I was kind of: "Bwuh?" It just didn't add up. Maybe the bad voice acting and lack of animation on her face were to blame in this case.

Gyrion and his allies didn't really go anywhere either though. There is a hint early on that they might have interesting backgrounds, with Kabal having formerly been a mage for example, but in the end nothing ever came of that either. Honestly a bit of a let-down.
Posted by Shintar at 21:01 No comments:

PSA: It seems that in the Cloaked Ascendancy's campaign progression, it's better to immediately follow up "Investigate [Boss X]" with "Confront [Boss X]" instead of investigating the other two bosses first, as this apparently unlocks the weekly quest. My pet tank and I were not aware of this and therefore wasted some valuable progression time during which we could have already had access to the weekly.

I really like what they've done with the weekly mission in this zone. There are three bosses with strongly themed lairs (magic, fire, nature), and each one presents a slightly different challenge in terms of mechanics, not just focusing on combat. In the first you super-jump across floating platforms, in the second you dodge streams of fire and in the third you get to ride fey stags through an obstacle course before confronting the boss. You only actually have to face one of them each week too, so if not all of these mechanics float your boat, you can pick your favourite and just stick to that.

Even though we initially died many times before we got it right the first time, I think the stag ride in Nostura's realm is my personal favourite so far. The slight trippiness of it all somehow reminded me of Robot Attack Unicorn - thus I chose Erasure as my soundtrack when I recorded it:

Devs Are People Too

After Thursday's patch, my pet tank and I logged into the River District to be greeted by massive lag and rubberbanding. I quickly noticed that the instance cap appeared to have been raised from its usual 15-20(?) to 50, which the engine couldn't handle at all. Checking the forums, this was unintentional and had apparently happened before. I was surprised though to see a dev chime in directly:

There's a new system we're using to adjust the instance cap easily. Each week, we're finding slightly new problems with it where it's reverting last week's change. Each time, for different reasons, even if it looks the same to players. I appreciate your patience after each maintenance morning while I'm mid-commute before I can fix it. Today took a little longer since my root canal took longer than expected, so the caps were wrong until around 11. Next week's maintenance will integrate the actual map sizes into the build, so no more overrides to get lost.

So, there you have it: we can blame his root canal. It was funny to see a dev put such a personal note on a bug report. Kind of reminded me of how things go at my place of work sometimes when my employer's website has issues.
Posted by Shintar at 22:12 No comments:

The heroic encounters in the River District are a funny thing. There are four large ones in total - three that share a spawn timer and appear in one of three corners of the map (I don't know if their order is fixed or randomised), and one that can be triggered by player hand-ins and is located almost right next to the zone's base.

As a result, everyone runs the latter all the time and general chat is flooded with invite requests so that people can chain-run the encounter by quickly hopping from one instance to the next. Meanwhile, the other three events largely go ignored. (The fact that the teleporting mobs that are part of Gyrion's forces are super annoying doesn't help.)

MMO min-maxing at its finest.
Posted by Shintar at 06:17 No comments:

Like most of Neverwinter's campaigns, the River District can be summed up as "more of the same, but a bit different". Here's what I like and don't like about it so far:

+ The environment. While one could argue that a slightly twisted cityscape doesn't make for the most exciting adventuring zone, I like being back in the game's eponymous capital.

+ Zone size. Sea of Moving Ice taught me that bigger isn't necessarily better, especially when a single round of dailies takes ages simply because you spend ten minutes travelling to where you need to be. I like how the River District feels much more compact.

+ Variety of activities. Instead of being asked to do x number of daily quests every day, you're only given a single quest that basically asks you to "do stuff" and you can pick your own activity mix to complete it. This allows you to change things up at any time.

+ Better treasure maps. The treasure maps from Sea of Moving Ice have made a return here, but since the environment contains a lot more notable points of interest, you actually stand a reasonable chance of finding the treasure even without a guide.

- Mob density. This might be a side effect of the small zone size, but mob packs are plentiful and hard to avoid. Additionally they seem to be tuned to hit in such a way that a purple quality mount isn't enough to not get knocked off anymore, so I'm getting dismounted pretty much any time I aggro anything at all.

Overall, the good seems to outweigh the bad so far.
Posted by Shintar at 22:08 No comments:

I just haven't been playing Neverwinter lately because the launch of the latest SWTOR expansion drew both me and all my guildies back to that. The greatly reduced log-in rewards also didn't give me any reason to keep logging in at least once a day anymore. 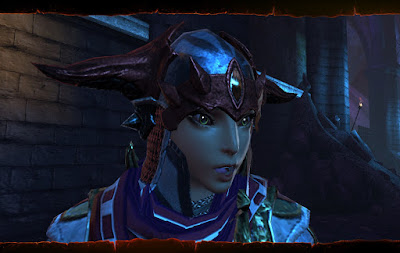 However, my pet tank and I are now back to check out the River District. I loved the giant O-face my character made in chapter four of the story. More thoughts may follow as and when.
Posted by Shintar at 06:45 3 comments: