Working on various (legacy) campaigns on my alts is one of my favourite things to do in Neverwinter. So I was pleased that Cryptic ran a lot of double campaign currency events over the past couple of months - in fact they covered all the legacy campaigns during that time: first a week of Sharandar, then Dread Ring, then Icewind Dale and so on.

However, this proved once again that you can have too much of a good thing: After eight weeks or so of grinding campaigns like a maniac on multiple alts, I'm just terribly burnt out. (Even with double currency and a signet of patronage, nobody should try to complete the entirety of the Chult campaign several times in a single week. Just saying.)

And thus, I once again find myself drifting away from Neverwinter for a bit to recover. Somehow, that's how it always goes.

Having spent a lot of time questing in older campaign zones in the last few weeks, I've had plenty of opportunity to refine my BHE calling etiquette.

The server completed the first milestone on the way to restoring the Citadel last week. I'm not sure if it's been officially stated, but I think the grind for the second milestone won't actually start until the 15th of September.

Somewhat to my own surprise, I've already nearly completed my first personal milestone on my main as well. The weekly objectives have helped a lot with that. Still, I bought the "Reforger's Blessing" to remove the timer anyway, as I also wanted to unlock the whole thing permanently for all my alts.

In terms of progressing the event for everyone, completion of the first milestone dramatically increased the number of angels in the Citadel and unlocked hunts in Avernus, a feature we haven't seen since Ravenloft, though this implementation is more of a throwback to Chult with its multiple layers of randomness stacked on top of each other. We'd already wondered about all those named mobs with special markers next to their names that didn't seem to serve any purpose, but now they finally drop rare items to buy lures. It does spice up the zone a bit, though so far the reward for getting the lures and killing a hunt target doesn't really seem to be worth the effort.

Email ThisBlogThis!Share to TwitterShare to FacebookShare to Pinterest
Labels: avernus, the redeemed citadel

Any quest that asks you to do heroics in Omu is a bit annoying because there is only one, The Tyrant, and it only pops about once an hour. Doing the other quests in the area only takes so much time and if you're unlucky, you can be in for quite a wait.

There is another option though - if you empower all nine shrines on the map, another large heroic encounter called "Wrath of Acererak" is triggered. For a long time, I never saw this even once, as shrines only stay empowered for about five minutes, which means that you need at least three people to work in tandem to trigger the event. While Omu was current content, I did this with my guildies out of sheer curiosity once, but that was it. 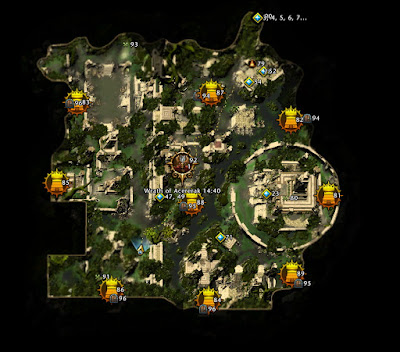 However, in the past week I did this heroic about five times and often did my part to empower the shrines too: It was Chult bonus week, and people get bored waiting for the Tyrant to pop. It was actually quite satisfying to see that strangers can work together to launch the event as well - all it takes is a little bit of co-ordination in zone chat. Plus I love the evil cackling sound that plays whenever you succeed in launching it.