I've been working my way through the Maze Engine story/campaign and it's getting slower and slower. After the first three "chapters" you are asked to complete a daily quest for five days before the next chapter is unlocked. Then, after the next two chapters, you are asked to do ten days of the campaign daily quest to unlock the next bit of the story... and so on and so forth.

It's an obvious, annoying ploy to stretch out the amount of time for which the module will keep people busy, and yet I can't entirely blame Cryptic for choosing this route. In Underdark, they allowed us to play through the whole story in one go - and we did. Then I at least saw that the rest of the campaign consisted of grinding annoying heroic encounters and decided not to bother.

Inserting the grind in slightly smaller chunks between story chapters seems more palpable, but at the same time I can't help but think that there must be a better way...
Posted by Shintar at 21:04 1 comment:

Day of the Dungeon Master

This former April Fools' Day event was so popular that they decided to extend it to a whole month this time around. I never actually participated myself before, so this was my first time doing more than reading about it.

The whole set-up of everyone being turned into little mini figures that are being roleplayed by the NPCs is fun and has obviously been crafted with lots of love - from little jokes like dice standing in for orcs and kobolds to the fact that every NPC has a fully filled out character sheet in front of them. (Who'd have thought that Drizzt would want to play a paladin?) 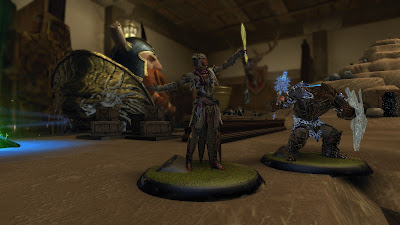 Sadly the actual activities aren't really anything to write home about and the associated new campaign seems pointlessly grindy. Still, I'm happy to have seen it at least.
Posted by Shintar at 21:29 No comments: