A Touch Of Madness

The reason I had stayed away from this one for so long was that I perceived it as extremely grindy, and looking at the raw numbers, having to acquire 7000 Faerzress at 18-50 units a pop certainly does add up to quite a slog. Thankfully I got a lot of mileage out of a recent double Underdark currency event.

I did realise though that all things considered, the grind wasn't really that much worse than for most campaigns; what made the difference for me were the heroic encounters. I liked them well enough as something sprinkled in among the regular quests like in Icewind Dale, but a whole campaign of nothing but grinding heroic encounters (or skirmishes I guess) was just super boring to me. I like the classic questing model. I don't think I would have much fun in Guild Wars 2.
Posted by Shintar at 23:36 3 comments:

So, another thing that I never thought would happen... happened: I completed the last boon from the Well of Dragons campaign. Once I realised how easy Linu's Favor was to gain through doing Temple of Tiamat, it was only a matter of time. I wasn't joking when I said I only needed to do it fifteen more times: That's exactly what I did, one day at a time.

Mind you, most of my runs weren't quite as fast and smooth as that first one, with most of them needing two or three "head phases" to get Tiamat down. One time it even took a full five rounds; I was very surprised that we didn't hit some sort of enrage or fail state considering for how long that fight had been dragging on by that point.

It also took me an embarrassing number of deaths to I figure out how the dragon souls and the five heads' various breath weapons work. On top of that, it wasn't until I did these runs that I realised that the hoard in the Well of Dragons actually has a purpose in the form of buffing the combatants and increasing your chances of good loot! I'd always thought that it was just some leftover from the old days required to originally "unlock" the Temple of Tiamat.

I could see myself doing this on some of my alts now... though not immediately; two weeks of slaying a giant five-headed dragon every day are quite enough for now.
Posted by Shintar at 22:37 2 comments: 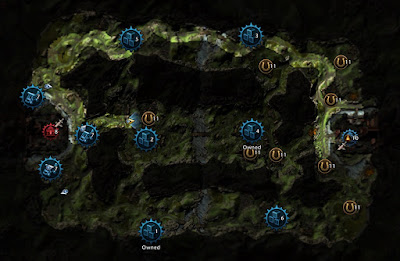 It struck me as something that was clearly meant to be quite involved and epic but never really seems to have taken off. The alliance just does it for the rewards from the weekly quest but doesn't take the competition very seriously: one guy just takes on the role of the enemy guild while everyone else smashes his guild hall for an easy win. Seems like a shame really; I could imagine this being pretty epic when played "properly".
Posted by Shintar at 21:05 2 comments:

Last week Cryptic announced that Neverwinter's next module is going to be Ravenloft. I'm not going to link the so-called announcement trailer because it's literally nothing but a few seconds of spooky sound before the title card appears - you can do better than that, Cryptic.

That said, most of the reactions I've seen so far have been rather pleased with the news. During my own tabletop roleplaying days my very first adventure was set in Ravenloft, so I have fond memories of the setting too. DDO also had a Ravenloft expansion not long ago, which Syp has been gushing about.

That said, some of the details have dampened my excitement a bit. For example there will be more hunts, which I'm still not fond of, and Castle Ravenloft itself will apparently be an epic dungeon, so my chances of ever seeing it are quite low.
Posted by Shintar at 22:18 3 comments:

Email ThisBlogThis!Share to TwitterShare to FacebookShare to Pinterest
Labels: ravenloft

Only took me... three and a half years? 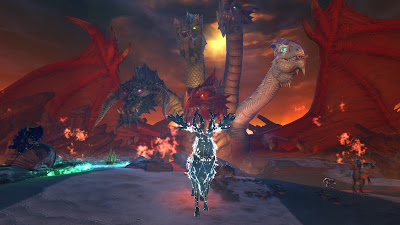 As part of my current project to get my main caught up on unfinished campaigns, I've been adding to the hoard in Well of Dragons to gain Linu's Favor, but it's just ridiculously grindy. Everyone says that doing the epic trial to kill Tiamat is much better for gaining this currency, but I'd never done it.

I wasn't really deterred by my recent terrible experience in Assault on Svardborg, as I knew that my pet tank and at least one other guildie had completed this particular trial successfully many times before, and if they could do it, then so could I! I quizzed my pet tank about tactics and he reckoned that - considering that this was the very first epic trial added to the game and has been around for years, so people mostly know the fight quite well - my chances were probably pretty good.

And indeed, I got lucky. It took a little while for the queue to pop, but once I got in I was just following a raging horde of experienced players around who killed everything in seconds. The top damage dealer finished the instance with nearly 150 million damage done! The tactics didn't even seem to matter much - for example I had often been told about how you need to kill Tiamat's many heads at roughly the same time (within a timed phase) to prevent them from respawning, but in this group they were dying so fast that the whole group just ran from one head to the next, killing them one by one, and then the boss was already dead before the next phase could even start. Meanwhile, I managed to die once by accidentally jumping off a cliff. 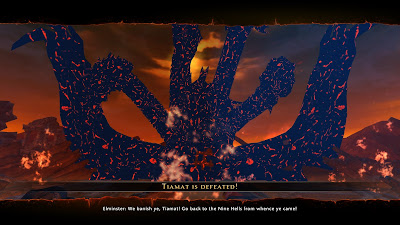 But I did get one Linu for my efforts! Now, if I can repeat that about fifteen times, it won't have been too terrible a time investment overall...
Posted by Shintar at 23:19 6 comments:

No Life At Sea

The other day I was surprised by this achievement popping up while I was making the rounds in Sea of Moving Ice (click to embiggen): 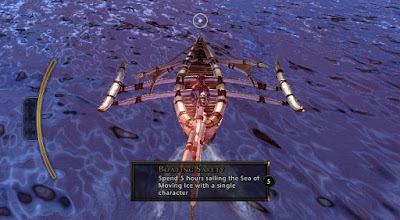 Seriously, five hours of just cruising around in the damn boat? Just more evidence that this zone is way too large. What am I doing with my life...
Posted by Shintar at 22:18 2 comments:

I finished the Maze Engine campaign on my rogue today, yay! Unfortunately I also learned that one of my rogue's daily powers, Lurker's Assault, doesn't play nice with the last fight at all. Part of its effect is that it teleports me towards my current target, but something about Baphomet causes this movement to get messed up.

Once I got stuck in the air and it was kind of funny because I could at least still hit the boss, but when it happened again I somehow got trapped on the outer age of the platform on which the fight takes place instead, unable to move back in or target the boss (though he could still hit me somehow). I tried to commit suicide by jumping down into the lava (and Drizzt dutifully followed me) but it actually ended up doing no damage to me and I just ended up stuck at the bottom of the room instead. The /stuck command didn't help either, and eventually I had to Alt+F4 to get back out.

Then I repeated the fight for the weekly quest, and the exact same thing happened again. I guess I just won't be able to use that particular daily power on this fight, ever.
Posted by Shintar at 17:52 2 comments:

I Tried Assault on Svardborg Today

Until a couple of weeks ago I'd never done an "epic trial", which I guess is what passes for a raid in Neverwinter. When I finally overcame my reluctance and queued for (normal) Demogorgon (the epic trial introduced with Maze Engine), I was pleasantly surprised by how easy it was and that it didn't even take ten minutes.

So when I recently hit the maximum amount of "potential bonus rewards" for the epic trial Assault on Svardborg, which you accumulate from questing in Sea of Moving Ice, I thought I'd give that one a try too.

I got a pop after about fifteen minutes. Everybody seemed kind of hesitant to run in and start the fight, until one guy finally took the lead. I followed him and immediately got turned into a block of ice. I stayed that way for about ten seconds, then died. This repeated a couple of times (me running in, turning into an ice block and then dying a few seconds later), with other people also dying left and right; then everybody abandoned the instance.

I looked up the basic strategy for the fight to better understand what had happened and to be honest it sounds way too complicated for a pug even on normal. For example when people get turned into blocks of ice, others are supposed to break them out within seconds or the frozen person dies (like I did). As if that's going to happen with a bunch of randoms!

I guess those bonus rewards will remain unclaimed.
Posted by Shintar at 22:57 2 comments: