My husband and a guildie have spent the last week going on about this event that's going on right now called "Tales of Old" and yesterday I finally gave in and agreed to take part. Apparently it centres on a selection of old dungeons that were previously removed and are selectively being returned for this event in a sort of challenge mode. 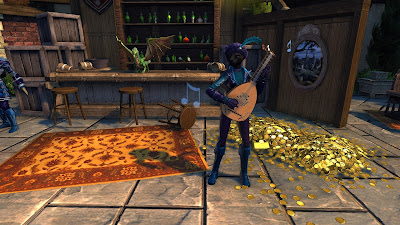 The framing for the event is that your party is working with a bard called Nipsy to spin an epic tale of how you supposedly once conquered a particular old dungeon, and you re-tell/re-run it several times to embellish your exploits. The first time you just do/did it without using any consumables, the second your artifacts didn't work either, the third time around you were hurting yourselves with every at-will power you cast, the fourth time all the enemies were doing poison damage on top of their normal abilities, and the final time you also had most/all(?) of your stats halved and are shrunk in size.

There are limitations both in the form of a timer (though it's not too tight and can be extended) and a death counter, which work together quite nicely to keep you going at a decent pace but without getting careless, as running out of "lives" ends the adventure just as prematurely as letting the timer run out.

We only did the first three difficulties in our run of Lair of the Mad Dragon as it was coming up to the event's reset time and my husband found out first hand that being in the instance when it resets leads to nothing but a very bad time. These were all fairly chill, though I'm told that the difficulty ramps up considerably at stages four and five.

As someone who's generally not super keen on Neverwinter's dungeons I was pleasantly surprised by how much fun this was, though I can imagine the required repetition becoming quite tedious in the long run. Still, now I want to try some of the other dungeons in the rotation before the event ends in a few days.
Posted by Shintar at 01:13 1 comment:

During one of our first visits to Avernus I saw a player talk in general chat about soon being able to open a chicken farm, and I remember wondering what that was all about.

As it turns out, one of the reward mechanisms in Infernal Descent is that you can use the currency acquired from repeatable quests and heroic encounters to buy "surprise bags", which have a chance of containing good gear, astral diamonds, or a random companion, vanity pet or mount. As it happens, by far the most common drop from them is the "infernal chick" vanity pet, and after a few weeks of buying these bags I, too, am up to owning 24 of the little things.

Unfortunately you can neither trade nor sell them, not even to a vendor, so they've just been accumulating in my vanity pet inventory. As of now there's still plenty of space in there, but I do wish Cryptic would let me do something with them other than delete them. As I generally hate deleting things in MMOs, I'll stick to the chicken farm in my bags for now.
Posted by Shintar at 23:00 3 comments:

In-game shorthand can tell you a lot about new content even when you don't quite know yet what all the acronyms stand for.

For example, when we first started questing in Avernus, we quickly noticed that chat was full of "+siege" and "+ape". This indicated that there were at least two big heroic encounters (BHEs, or "beehees" as my husband likes to call them) on the map that people liked to run for the rewards.

"Ape" seemed like a bit of an odd name, mind you, but we soon found out that this was because while the encounter was technically called "Demonic Summoning", it involved killing a giant Barlgura, a type of demon that looks like - you guessed it - some kind of ape. Why waste precious syllables when a simple "ape" will do it?
Posted by Shintar at 18:31 1 comment:

Infernal Descent takes place in Avernus, the first circle of hell according to D&D lore. Players are provided with a safe haven there in the form of your base of operations, a stronghold that was pulled down into hell due to a curse or something, but otherwise the environment is (understandably) very hostile. 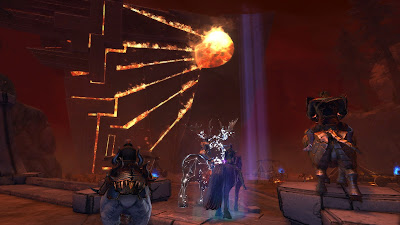 I think it's always challenging to make players spend extended amounts of time in zones that are by their very nature extremely hostile and unpleasant, because if the environment truly lives up to its reputation, no amount of rewards will make people want to hang around.

Avernus, too, largely manages to deliver on what you'd expect from a circle of hell, with a slightly grating soundtrack and everything being tinted in unpleasant shades of red. Even the mobs contribute, as the Erinyes' screeching for example is a proper pain in the rear. It's bearable for the duration it takes to get your weeklies done and the gameplay is fun, but unsurprisingly the first circle of hell is not a place where I'd like to spend more time in the long run.
Posted by Shintar at 18:10 No comments:

In the past, Cryptic impressed players on April Fools' Day by creating a whole new, lovingly crafted joke campaign for the event, which became so popular that they just turned it into a generally recurring event after a while.

Since then I don't recall seeing anything new for April Fools, so I was pleasantly surprised to see them come up with something new this year: "April Fowls".

This silly event is chiock-full of bad chicken puns and mostly consists of a few daily quests that involve you turning into a chicken and using unique combat abilities. The currency you earn from them can be used to buy a giant chicken mount or a couple of vanity pets.

There is also a chicken themed PvP brawl that involves you taking on the same chicken forms and abilities as in the daily quests while pecking enemy players to death. I've only done it once so far but couldn't stop laughing pretty much through the entire thing.

It's not the most sophisticated event ever, but the light-hearted silliness of it all is just right for the current climate in my eyes, and for a limited-time event it's been great fun. It's on for a few more days if you haven't had a chance to give it a go. 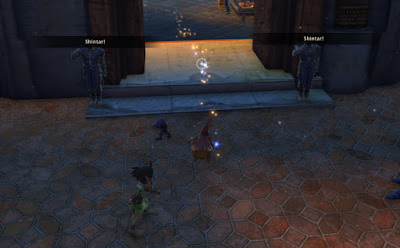 Also amusing: guards continue to salute me while in chicken form.
Posted by Shintar at 14:22 2 comments:

As much as Uprising was a letdown, fortunately the newest module seems to be a good one again. In fact, my immediate impression was that after something like three lacklustre modules in a row, someone at Cryptic must have sat down to check which one was the last module that players really liked (Ravenloft) and decided to simply copy that.

Infernal Descent doesn't feature as iconic a setting, but it also has an introduction with some neat-ish cut scenes, interesting NPCs, and the way the overall campaign works is almost a straight copy and paste from Ravenloft: a map with a mix of big and small heroic encounters, endlessly repeatable quests on a randomised rotation and some very rewarding weeklies.