About two years ago, I made a point of doing the Siege of Neverwinter event on my paladin to get her the Neverwinter Champion's Charger, an armoured horse mount that, among other things, stood out for its funny walk. Instead of galloping like most horses, it ran at a very fast trot, which was not completely unique - the Jubilee Parade Horse uses the same animation - but rare. It made the rider look a littlie bit uppity and just a tad ridiculous, which suited my pally just fine.

Well, image my horror when I had to discover this week that they apparently patched that out! Now my charger gallops just like any other old horse. I am disappoint. What an odd change to make. 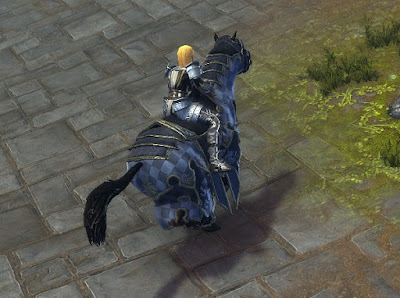 With how intensely I've been playing for the past few months, I've been purchasing VIP time throughout most of that and actually reached max VIP rank at long last. This week I let it run out though, as I've been taking a bit of a break until the release of the next module and didn't want to feel like I had to log in every day to claim my free keys during that time.

On the occasions I do log in, I've been missing the perks like mad though! Mostly I keep trying to invoke in places where I can't, and I've previously written a post about what makes the travel signpost so attractive. Now I also miss the ability to summon a mailbox or banking portal at will.

It's funny to me how much I've come to rely on VIP features after not finding them that attractive when they first came out. I still think that the game is very easily playable without them, but once you get used to the extra convenience it's really annoying to have to make do without it. I have to give credit to Cryptic there for managing to hit a sweet spot in terms of usefulness.
Posted by Shintar at 13:00 No comments:

I didn't find completing the Cloaked Ascendancy for a second time too bad - what with using a Signet of Patronage and being able to complete the area's daily quest in about ten minutes by chaining five of the small heroic encounters.

A couple of months ago Cryptic already nerfed the seal rewards from those heroics, but I didn't really care much about that at the time because I wasn't running them for the seals anyway; I was running them to progress the campaign.

Fast forward to this week, when I decided to start my third character on the River District... just to find that at some point in the recent past, Cryptic also nerfed the heroics' contribution to the daily quest. While you could previously complete it from five encounters, now you need twice as many, presumably in an attempt to push more people towards doing the mini lairs instead, which I don't like very much. (Unless those have been nerfed too. I didn't try.)

I'm feeling really dejected by this - why make an old campaign that already suffers from being somewhat boring and grindy even more so? I get that this game is very much about grinding, but at least when it came to older content, Cryptic used to be a bit more generous and tended to lower requirements over time instead of raising them.
Posted by Shintar at 11:56 4 comments:

We've had another dev blog with accompanying forum thread on an upcoming Heart of Fire change: the concept of salvaging high-end gear (turning it into unrefined astral diamonds) is going away, and instead this gear will now just turn into refinement points like lower level gear.

My first reaction was a proper Darth Vader-like "Nooo!" though I guess in fairness, we don't really know just how bad it's going to be yet. The devs say that they'll add AD as a reward to lots of activities to compensate for the loss from salvaging, but they don't have a history of getting that sort of rebalancing right very often.

It's still going to be a nerf for me either way, because as it stands, I'd often collect gear on the weekend when I had more time to play, and then slowly salvage it throughout the week to maximise my bonus AD from invoking. After this change I won't be able to "save up" AD this way anymore, so if I don't have as much time to play during the week, well that's just too bad.

I suppose I should have seen it coming though, as I've been feeling quite comfortable with my AD acquisition levels lately, considering my casual level of play. One thing I've learned throughout the years is that if something is working well for me on a casual level, Cryptic will rate it as crazily unbalanced at the high-end, and it will be nerfed soon afterwards.
Posted by Shintar at 23:04 No comments:

I have a habit of staying up late on Sundays when I shouldn't, probably because subconsciously I don't want the weekend to end. As a result I tend to feel very tired by Monday evening and usually don't game as much as I would on another day.

I'm starting to think though that I might be missing out by not playing on Mondays more often. The first time I noticed this was when I happened to spend a Monday in Borovia, where the map was being positively depopulated by all the hardcore players running around and slaughtering everything in sight to quickly get their weekly done, and when the big heroic on Yester Hill popped, I never saw Thornspur die so quickly before.

This week I observed the same phenomenon when I quickly jumped into Omu one more time, the Tyrant came up, and people killed everything so quickly that I actually got the achievement for keeping all the beast cages intact. Plus at the end, where the Tyrant is supposed to run away when his health gets low - well, it did still happen because the script commanded it, but strictly speaking his health had already hit zero a long time ago. Just finding a good group to tag along with makes this kind of content so much easier.
Posted by Shintar at 17:35 1 comment: