I really spent a lot of time at the Summer Festival this year, despite of still not caring that much about any of the rewards. It was just fun. Nonetheless I ended up getting myself the full Sunite outfit as well as the water horse, simply because I could. 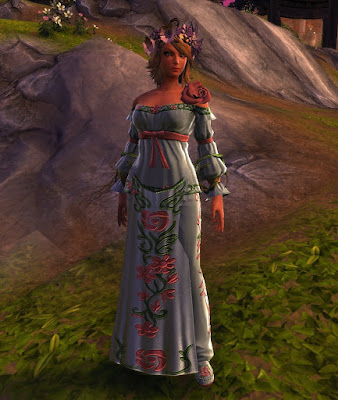 My only gripe was that they gave the festival an unexpected extension... why did this annoy me? Because one of its main currencies, Fireblossom Petals, are only temporary, and I had spent all my leftovers on what I thought was going to be the last day. If I had known that the festival was going to continue for another couple of days, I would have saved them and would have ultimately been able to afford another one of the nicer items.
Posted by Shintar at 22:26 No comments:

The Summer Festival has come around again and since I remember quite enjoying it last time, I wanted to have another look at it... however SWTOR's Dark vs. Light event has its hooks in me pretty firmly right now. I kept telling myself that I probably wasn't missing anything as the festival would just offer the same activities that I've already done before, however it turned out that I was actually wrong about that!

There is a new ball game called Sahha, which is played in an instance in teams of 5v5, and while it's a bit slow, I did find it decent fun to play with my guildies. Once again Cryptic gets credit for trying to come up with some fun non-combat gameplay as an alternative to all the fighting.

A recent patch introduced a feature called guild alliances. The system remains opaque to me, even though our guild has joined one such alliance. One thing I've learned is that not all guilds in an alliance are created equal; instead one gets to be the "boss", who has several subordinates, each of whom has another bunch of subordinates of their own. We hold the lowest rank of these while being beholden to a "boss" guild called "GOD", which has led to all kinds of opportunities for punny humour (comments about "seeing god", "being with god" etc.).

One clear benefit is that all the alliance strongholds get linked up for easy visitation rights, and members of all participating guilds can team up to tackle the heroic dragon encounters on the stronghold map, which seem to require 20+ people if you want to kill more than one of the four dragons.

Annoyingly, part of the rewards from these encounters are contained in special kinds of lockboxes for which you need a new kind of key from the cash shop, and I'm almost ashamed to admit that I did shell out some zen to be able to unlock the few I got. And to think the rewards weren't even that great...

It's been fun to be part of the loosely directed zerg to kill the dragons a few times now (they need to die close to simultaneously, so there's a lot of "everyone except two people switch from red to black" kind of shouting going on), but I could see those fights getting boring quickly as there isn't much else to pay attention to. The fun is additionally reduced by the fact that one or two of the dragons have glitchy/hard or impossible to see mechanics that one-shot people, so depending on which dragon you are on, you can end up in an ongoing cycle of dying, resurrecting at the nearest campfire, using an injury kit, running back, landing a couple of attacks and immediately dying again.
Posted by Shintar at 22:25 No comments: