I've been holding off on writing about hunts because I didn't even understand how they work for ages. Unfortunately the system is unusually poorly explained in-game. Fortunately Neverwinter Unblogged's guide came to the rescue.

The basic idea of a hunt is that you spawn a mini-boss with a lure and this boss then has a chance of dropping some nice loot.

However, to trade for a lure you need both a trophy and a T-Rex fang. Trophies have a chance of dropping from rare mobs, which in turn have a chance of spawning in various spots on the map where the regular version of that mob usually spawns. So you could find a sabertooth in a tiger spawn point for example. A T-Rex is the rare version of a regular Tyrannosaur, of which there are only ever a couple on the map. Both the regular version and the rare T-Rex are incredibly tedious to kill if you don't have high dps.

Unfortunately the jungle is an aggravating place to be and the whole system is just one layer of randomness after another. As a more casual player I can only give it a thumbs-down.
Posted by Shintar at 14:24 No comments:

Email ThisBlogThis!Share to TwitterShare to FacebookShare to Pinterest
Labels: tomb of annihilation

I've mentioned before that the huge number of attributes that a character can have in Neverwinter creates huge min-maxing potential. I haven't played another MMO where there is such a massive difference between characters not just based on class and skill but also based on gear.

A good example was when my pet tank and I queued for the Merchant's Prince's Folly skirmish today (small group PvE content). We could immediately tell that someone in the group was doing massive dps based on how quickly we were carving through the instance, and indeed, at the end the statistics screen revealed that our great weapon fighter (for some reason it's almost always a great weapon fighter) had done more than 38 million damage compared to my less than two. That means that he did more than 1800% of my own damage! And it's not as if I was just standing around and not trying.

It can be a bit discouraging sometimes to see these huge performance gaps, but at the same time I have to hand it to the community that at least in the sort of PvE content that I tend to do, nobody ever bothers you about bad performance. More often than not I tend to just be grateful to those players for carrying people like me to victory without complaint.
Posted by Shintar at 22:23 No comments:

Despite of my earlier complaints, I finished this year's Winter Festival on a positive note, by achieving both of the goals that I had set myself initially, which were to earn the seasonal weapon skins for both my great weapon fighter and my paladin.

Funny thing is, I haven't even used the one for my fighter yet, because the one I used to "temporarily" turn her new artifact weapon back into a sword is actually quite nice, so I decided to just save the new skin for whenever I need to change weapons again. (ETA about two years?)

I do love my pally's new look though; I find that the sparkly theme fits the class particularly well. The only thing that disappointed me a little is how small the new appearance makes the shield look, as I always found it quite humorous to see my petite elf disappear behind a ginormous shield wall that she'd probably never even be able to carry. 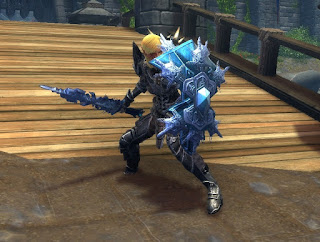 Early on while participating in this season's Winter Festival, I noticed that I would occasionally fish up "treasures" during the fishing contest. As treasures are usually what Neverwinter calls vendor trash, I didn't think too much of it.

They weren't marked as vendor trash however, so I eventually looked them up and learned that there is a vendor who trades these for various campaign currencies. He's located on a pedestal behind the daily quest giver in Twilight Tor and has a somewhat unusual-looking face, which immediately made me wonder whether he was modelled after a real person... But I still shrugged it all off - I'm generally fine just playing through the campaigns the normal way.

Then, two days before the end of the event, I learned that ten fished-up Treasures of Tiamat can be traded for one Linu's Favor, the annoying-to-come-by campaign currency that has stopped me from officially completing the Tyranny of Dragons campaign to this day. And this option has been in game since 2016???

I went on an emergency fishing spree on my main, but even with the top fishing pole it took forever to get enough of the right treasures, so I eventually gave up on it again. I briefly considered buying a few sabiki rigs from the Zen store (special lures that increase your chance of getting a good catch), but then told myself that this wasn't much less "paying to win" than just buying full campaign completion.

Maybe I'll remember to start fishing on my main in time next winter...
Posted by Shintar at 21:02 No comments:

I've been spending some time at the Winter Festival this season after giving it a pass last year and it's still surprising amounts of fun! But the sheer bugginess of the Twilight Run has sent me into a rage more than once.

Okay, level sync getting removed when you collect one of the bonus baggies is just funny and doesn't affect the run itself.

Lag and rubberbanding making you miss objectives is super annoying but hardly new.

However, what's with the gates and the quest bugging out all the time and not giving proper credit? I once managed a run where I only got 10 points for the slalom gates, and no, I had not managed to miss every single one of them bar one.

The quest getting stuck entirely is even worse - most often I had it suddenly stop at one of the rally gates and then just complete after the run is finished, but twice it also managed to bug out at the very end, saying I had failed to reach the finish line and staying that way until I did another full run for zero points (at that stage, even running over a bonus bag would give me nothing) to run over the finish line a second time.
Posted by Shintar at 14:48 No comments: