That's my guardian figher at 70, which only leaves the scourge warlock! 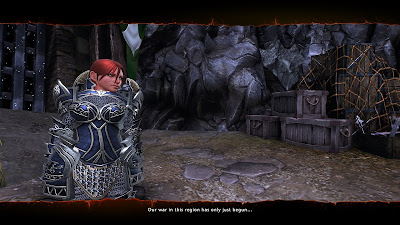 I originally created this character to play on stream with my friend Traitine, but then we ended up only playing a single session together before he was like: "Yeaaah, this game is not for me." So eventually I just levelled her up on my own.

She'd been lingering in the low sixties for ages, but with the recent smoothing out of the 60-70 curve I thought I'd play around a bit to see how much of  a difference it made and she flew right through those last few levels.

Unfortunately I can't claim to have found the class very fun, and I can't blame my pet tank for rerolling to paladin now. Presumably guardian fighters have their role to play at endgame, but while levelling - especially after having levelled a paladin first - the experience just kept making me think of a paladin with many of the fun features removed. Sorry, GF fans!
Posted by Shintar at 21:02 No comments:

This weekend I discovered that Cryptic updated the icon for Feydark Crystals. :-o

Overflow experience is a feature that I've liked from the start, however at level 70 it used to take quite long to level up. At 1,785,000 XP a pop, it took me quite a few play sessions to level up even once, and for that much effort the rewards often felt lacklustre.

Since Lost City of Omu was released, I noticed that I was suddenly levelling up much more quickly. At one point I managed to get three level-up rewards in a single play session! A quick Google search revealed that as part of this latest update, Crypic smoothed out the XP curve from 60-70, which apparently also reduced the XP requirement to level up at 70 to a measly 100,000 XP. That's less than 6% of the old requirement!

And I'm absolutely loving it. It makes playing at max level feel so much more rewarding, even more so as you have a chance of getting the 30,000 rough astral diamonds reward multiple times a day if you're lucky. For me that's a considerable cash flow addition!

Of course, knowing Cryptic's modus operandi whenever it has been too easy to earn AD in the past, I expect that this will be nerfed again soon, but I'll definitely enjoy it while it lasts.
Posted by Shintar at 20:57 1 comment:

One thing I've found fascinating over time is watching the way Cryptic iterates on its modules. If you look at the first three "expansions" for example, you can clearly see them refining the daily area concept with each release - Icewind Dale remains one of my favourite maps to play around on to this day.

However, every time they tried something very different, it didn't go down too well. I mean, I liked Tyranny of Dragons and the idea of a campaign that you can do while levelling (even if the associated level scaling was screwy), but based on them never repeating the experiment, I suspect it wasn't too well received. Elemental Evil with its level cap increase was a disaster for all kinds of reasons, and Underdark deciding to completely decouple the game's grind from its story... let's just say I probably wasn't the only one who noped right out of that one after playing through the whole story in a single evening.

Lately we've returned to a more traditional "daily area" model, however with the exception of Chult's "six times weekly" patrol missions, there's been a general move away from traditional daily quests coupled with a strong push towards forcing players to log in and play every single day by making it impossible to pick up several days worth of dailies just to "binge complete" them all at once on the weekend. This is a shame because that's exactly how I like to play through the old areas. It's no coincidence that I have yet to complete any campaign after Elemental Evil on any of my alts.
Posted by Shintar at 14:23 5 comments:

This skirmish that came with the Swords of Chult module is possibly the best one Cryptic has created so far. My pet tank and I have been running it a lot to gain the associated campaign currency (called totems) and it's always good fun.

It lives up to the format's promise of short and fast action, but manages to not completely limit itself to combat. I'm always keen to be the first one to rouse the guards or repair the weapons in the courtyard, or to raise barricades outside, because it makes me feel so much more useful than my piddly cleric dps.

The only thing I'm ambivalent about is the giant T-Rex outside. Since it would take most groups a while to kill it, the common tactic seems to be for one person to lure the big dino away into a corner while the rest of the party completes the escort, thereby increasing the group's chances of finishing with a gold medal. The only problem with this is that if the T-Rex isn't far enough away, it likes to keep people in combat, and while in combat you can't click the portal to exit. I've previously gotten stuck inside with the dino blocking the portal to the point where I had to hit Alt+F4 to get out. If there is a better way of escaping, I don't know what it is.
Posted by Shintar at 21:40 No comments:

I'm making a serious habit out of getting super excited about user interface changes and quality of life features while totally missing the actual content of a new module, or at least not getting to the latter until much later. So of course, upon logging in after the release of Lost City of Omu, I got super excited about the new fashion bag!

I'm still not sure there is even much of a point to fashion these days when you can just make your normal gear look any way you want, but fact is that it's still a system that exists. Sometimes I still get fashion items for free or as rewards, and unlike my pet tank I hate destroying or leaving things, so I've always dutifully stashed them away in my bank while simultaneously feeling bad about the space they were taking up, because I didn't really care about them that much.

Finally this is no longer going to be a problem, as we now have a separate inventory tab to put a whole bunch of fashion items away for free. Despite of me not using them much, the freed up bank space alone really excited me, and to be honest, not having to worry about where to store new fashion in the future might even encourage me to pick up a few more such items and maybe even use them on occasion. Like with the introduction of the stable, the secret to making people want more of something that they can only use one at a time is to not make it a chore to have more than one.
Posted by Shintar at 21:20 No comments: