One of the above is currently going on in-game. When the first one came around, I sighed a bit. Wasn't part of the point of the big refinement changes to make sure that people wouldn't feel like they needed to wait until a special refinement weekend anymore to upgrade all their items?

However, in this case I worried for nothing, because Cryptic stayed true to their word. Unlike the previous double refinement events, the new bonus RP changes nothing about the way you actually upgrade your items - it just causes refinement items to drop with higher frequency while you're out questing in the world.

From my limited experience this isn't really something to write home about, but for a casual player like me it can provide that extra push to take an alt out for a spin, knowing that on top of whatever else I'll be doing, I'll also be earning extra RP.

Like previous changes to invocation, this is another step towards encouraging people to actually play instead of simply rewarding them for logging in at the right time. I don't know how well that's working out for Cryptic, but it does seem like a sensible plan.
Posted by Shintar at 17:35 No comments:

In what is quite a departure from previous modules, the Chultan jungle only contains two heroic encounters, and they are both of the big kind that requires a decent amount of players. Considering that Chult is a pretty hostile environment to begin with and heroics tend to crank up the hostility levels to eleven, that means that hardly anyone ever does them. Which sucks when you're still relatively new to the zone and just got a weekly quest to complete a heroic encounter.

Not that I can blame anyone. With these types of big bads you can't just make a start and hope that more people will join in as the fight progresses, and nobody wants to be the first person to run in and get annihilated. (Only someone well-geared and somewhat tanky really stands a chance anyway.) The encounter at Camp Vengeance also features the additional hurdle of having a step where you need to carry a certain amount of supplies from A to B but you can only carry one at a time, necessitating a certain minimum number of players to make sufficient progress before the timer runs out. Though I don't know if the encounter fails entirely if you fail that one step.

My pet tank and I did get Camp Vengeance done once by grabbing a guildie who plays dps and simply making a start on the not-too-deadly first step. Once we reached the supply carrying phase and others could see that there were multiple people working on it and actually getting somewhere, they slowly started joining in as well, and by the end we had sufficient numbers to complete the encounter successfully. Nothing attracts additional players like success, but it's hard to get things off the ground. 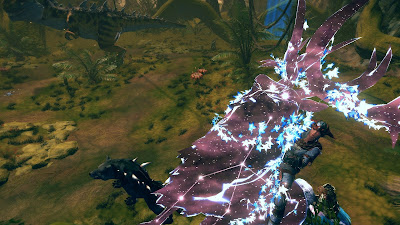 Selfie with giant dino in the back.

With King of Spines we got lucky as we noticed a player who was in the same instance shouting about wanting more players to take on the heroic. We figured that since we were already in the same instance, we might as well join in, and the group eventually grew large enough to successfully start and also complete the fight.

I'd love to know Crytic's thoughts behind this change though.
Posted by Shintar at 17:32 No comments:

Challenge of the Gods

This weekend saw the reappearance of the Challenge of the Gods event. This is one event that I'd only really been peripherally aware of before. I remember accidentally picking up a challenge while in a dungeon with my hunter ranger once and being very confused by what was going on.

This time I actually paid more attention and I now think that it's a pretty neat event. Basically mobs will often drop little items that on looting start a challenge (timed quest) for a certain god. These are always very simple tasks, such as killing five enemies within a minute or killing ten without using a daily power (full list here, though I'm not convinced it's entirely accurate).

I actually found it decent fun. Not all challenges are equally feasible at all times - for example completing a heroic encounter can be trivial on some maps but virtually impossible on others. The ones to do certain things while under half health seem impossible to do if you play a high-level character that never even drops that low or has talents/abilities that cause you to instantly heal up again. But that's okay, as the challenge items are plentiful and you can always ignore any given drop and just wait for the next one.

It's not hugely rewarding (I mostly just kept getting pointless potions), but it's a little thing to mix up your play session, as you find yourself playing just that little bit differently to meet your next challenge.
Posted by Shintar at 18:00 2 comments:

Email ThisBlogThis!Share to TwitterShare to FacebookShare to Pinterest
Labels: challenge of the gods, events

I usually don't give much thought to whether my virtual fantasy environments make sense, probably because they wouldn't really stand up to closer examination. Could a forest of this size really sustain that many wolves? Etc.

However, the situation in the jungles of Chult is particularly jarring. You can't take two steps without being assaulted by packs of predatory beasts, yet there isn't a single herbivore in sight. Whatever do all those raptors and tigers and tarantulas and giant scorpions even eat? Each other I guess.
Posted by Shintar at 17:21 1 comment: