End of an Era

With the new module, invoking was changed once again, this time so that it doesn't reward astral diamonds anymore. Instead you get "bonus diamonds", which means that the next time you do a "real" activity that rewards AD, such as a dungeon run, you get more than usual - if I understand the new system correctly anyway. As I do those activities so rarely, this bonus isn't worth the repeated daily logins for me, so I'll be back down to only logging in only once a day for the first invoke (I still like getting those coins) and to queue up professions.

When they originally introduced the now scrapped system that required logging in six times a day, staggered over the course of at least four hours, I wasn't thrilled, but somehow I got caught up in it anyway and ended up pursuing its rewards pretty obsessively. I actually feel kind of relieved that the incentive to continue doing so is gone and I won't be staring at the clock as much anymore. I do think it might also reduce my involvement with the game though. While logging in to press ctrl+i repeatedly wasn't engaging per se, each time was an opportunity for others to grab me and drag me into group content while I was online. And the time between the first couple of invokes was so short that I often didn't find it worth logging out and ran around taking care of a couple of small bits and pieces instead.

Also, I do wonder where my AD are going to come from now. I was pretty cross when they removed them from leadership, but things ended up being okay for me because my regular outgoings are small enough that my income from invoking was sufficient to keep me afloat. I'm not sure what's going to happen now. I shouldn't run out of AD too quickly, but I would expect to run out eventually. Also, any new characters will have a really hard time earning their first bits of currency now.
Posted by Shintar at 08:37 No comments:

What's this? A new character selection screen? But they didn't do that for any of the previous expansions! 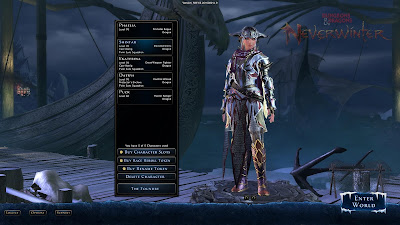 Now my characters will look even colder every time they load in in their underwear...
Posted by Shintar at 18:22 1 comment: