I've had some time to get used to the Undermountain class changes at least on my cleric and my rogue by now, and playing dps cleric isn't all that bad. I use the Arbiter dps specialisation most of the time, and once you figure out the rhythm it relies on, it actually plays pretty smoothly and might even be considered fun!
Unfortunately there has been no such redemption for the healing spec. I even looked up a guide and everything, to make sure I wasn't just doing it wrong, but even the guide writer admitted that the healing gameplay is pretty dull. Most of the time your rotation is basically ABABAB, with A being an AoE heal (so there isn't even any prioritising of targets going on) and B coming down to standing still to pray and regenerate your divinity resource. There is enough synergy there that you "only" have to spend about as much time praying as you spend casting, but that is frankly still too much. Plus the combination of just using a single heal most of the time that isn't even targeted is just boring as hell.
I always found the way Neverwinter didn't used to have any "real" healers a bit odd, but if you accepted that system for what it was it was fun. I'm not against the idea of having the classes play like a "proper" trinity now either, considering that this is what I enjoy in my other MMOs, but then Cryptic really needs to step it up and make the healing gameplay more interesting than alternating between quick bursts of spamming one ability and standing around praying. I hear that the next module is supposed to bring changes to the system, but I'll reserve judgement until I actually see how they play out.
Posted by Shintar at 20:56 No comments:

Devil Siege or Siege for short is one of the large heroic encounters in Avernus, and it's an odd one. The objective is to damage a massive siege engine until a boss appears, then kill the boss. 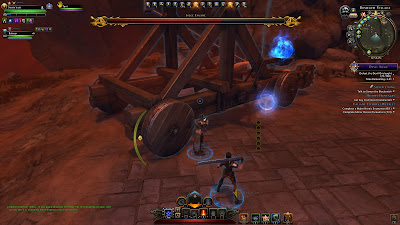 To achieve this, people first have to operate some catapults. How to do this is not terribly intuitive - for example they cannot be interacted with while any combat is going on too close to them, meaning that someone other than the catapult operator needs to make sure to drag any mobs away first.

What's really flummoxing though is that none of the actual objectives are displayed on the encounter tracker. It just tells you to kill devils - no mention of the siege engine at all - even though this appears to only be a bonus objective, and one I've never seen come even close to completion due to the insane number of kills it requires. I'm sure everyone new to the zone spends at least their first few runs of this heroic just killing devils in the middle, confused about what's going on and having to rely on one or two veterans who know what to do to actually progress the encounter.

More recently, the siege engine's health bar that can be seen in the above screenshot disappeared too, so now you don't even have an indicator of how well the fight is progressing. It's just confusing to me how anyone at Cryptic could have thought that this was a good idea.
Posted by Shintar at 15:35 1 comment:

When the level cap was raised to 80 with Undermountain, most old campaigns were awarded "legacy" status and not updated. I'm not sure what the selection criteria were, considering that the old Elemental Evil is still considered "current" while the much more recent Ravenloft has been designated a legacy campaign, but I'm guessing it might have simply come down to avoiding the hassle of re-scaling content where it would have been required.

With those old campaigns stuck at level 70, quests there can be completed with much more ease than previously now. To what end though? Cryptic were clearly asking themselves the same question and decided to add new weekly "legacy campaign quests" that ask you to either do quests, kill mobs or run heroic encounters on those old maps and that reward a special currency that can be used to purchase certain desirable items which were previously very hard to come by, such as companion upgrade tokens and high level enchanting stones.

This is one new feature I really love, as I'm both a fan of giving old content a new purpose and I really benefit from this new, more casual avenue to accessing those rare items.

All legacy campaign quests also reward currency for the campaign they are related to, plus bonus currency for a campaign of your choice (e.g. you could complete a quest to do Icewind Dale heroics and get both Icewind Dale currency as well as Chult tokens). This is useful to help get alts through campaigns you don't like as much and to get extra tokens that are required for stronghold upgrades.

I think this is really great design as it has also worked to greatly reinvigorate some of the old maps and especially the larger heroic encounters on them, which many people had previously lost interest in due to lack of rewards.
Posted by Shintar at 13:39 1 comment: