When Neverwinter's VIP programme came out, I figured right away that it wasn't really for me. However, since my pet tank has been very fond of VIP status and I had some Zen as well as a coupon lying around, I decided to buy one month just to see what it was like. The results were as follows:

1) The daily character reward of ten Scrolls of Identification was useful. Even while playing casually, I should be finding a use for all of them eventually.

2) The daily character reward of one Epic Dungeon Chest Key feels highly silly as a casual player, because after a single month all of my alts have more keys than I'm likely to need for the rest of my life.

3) The daily account reward of one lockbox key per day was interesting in so far as I had never bothered with Neverwinter's lockboxes before. I got a pair of boots out of one of them that was actually an upgrade, which was a nice surprise as I didn't even know that high-level gear was something that you could get from these. I also got a couple of marginally useful profession assets, but everything else was pretty useless. So many cheap enchantments and runestones! That's as if SWTOR's crates gave you nothing but a couple of blue companion gifts ninety percent of the time. If I had paid for keys specifically to open these I would have felt ripped off.
Posted by Shintar at 15:41 No comments:

Neverwinter's ninth module, The Maze Engine, launched yesterday, and while I have no opinion on the new content yet there was one gameplay feature that immediately caught my attention: the revamped mount system.

Cryptic had got caught in a weird spot with mounts. They are one of the most expensive and coveted items in the game, yet there was little incentive to own more than one. Mounts came in multiple different speeds, and only the fastest one was really interesting for everyday use. While it was theoretically possible to upgrade any mount to the highest speed, it was ridiculously expensive and usually not worth the bother. Also, since they took up bag space, you really didn't want to have too many of the things.

They tried to encourage players to buy more mounts by making them bestow stat increases and combat powers, but I think even that particular pay-to-win model was only a mixed success as people didn't want to keep chasing the newest, most powerful mount all the time, especially if they already liked the look of what they had.

Under the new system, mounts can finally be "stabled" so you can have more than one without them taking up any bag space, and mount skins and abilities can be mixed and matched as you please. This kills several birds with one stone:

1) Freed up bag slots mean that people will be more willing to own more than one mount.

2) Since you can give any mount max speed once you've unlocked it, previously under-appreciated, slower mounts can become attractive for their looks.

3) They can keep adding mounts with new powers and people can keep buying them without losing the look of their old favourites.

I'm still not sold on the pay-to-win aspect of mount powers and will likely ignore them for the most part, but otherwise I really have to say: well done, Cryptic. I already had both the unicorn and the armoured horse unlocked account-wide, so all my alts could travel fast, but now they can also do so in a variety of styles. 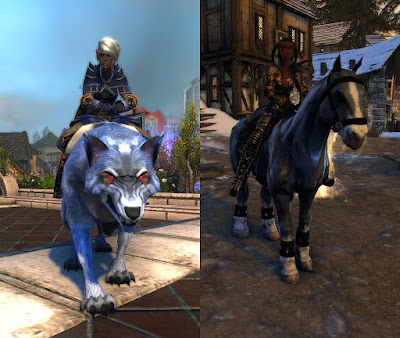 State of the Game

A few days ago, Neverwinter's Executive Producer Rob Overmeyer released a developer letter about the State of the Game. A lot of it was PR talk about all the amazing things they feel they achieved in the past year, but there was also an honest admission that they screwed up with Elemental Evil.

More than anything though, it's over 4000 (!) words about what they've been doing, what they are planning on doing, and why. This is one area where I wish Bioware would take a page out of Cryptic's book and be a bit more open about their thoughts and plans. It's often frustratingly opaque what's going on behind the scenes in SWTOR.
Posted by Shintar at 15:44 No comments: