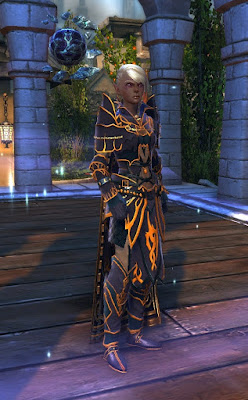 I finally hit 70 on my control wizard. She has exactly one round of Spinward Rise vigilance tasks left to do in order to get her artifact main hand (which requires level 70 to equip), so that was well timed.

Now my only problem is: What do I do with her after that? A big part of why I've been spending a lot of time playing her recently was that she was the one character of mine who wasn't already max-level and who therefore had slightly different things to do than the rest. I don't really want to start running campaign dailies on a fourth character.
Posted by Shintar at 18:33 3 comments:

I've spent a fair amount of time hating on Elemental Evil's vigilance tasks here, but I have to confess that lately I've actually been doing them again, and even without my pet tank. My control wizard is level 69, has completed the first three zones, and just got started on Spinward Rise. Basically, there are three factors that have made me change my mind, or at least made this way of levelling more bearable to me:

1) Stronghold quests: I like that during your sixties, you get two daily quests from your guild stronghold, one to complete four vigilance tasks and one to kill fifty mobs on the way. This adds some pacing, as four a day feels much more manageable than looking at the total number of quests required to get to the end and watching them reset every hour. Also, the extra quests for doing the same thing make each round of four tasks feel more rewarding.

2) Nerfs: After admitting that they messed up, Cryptic actually went through with nerfing level 60+ mobs, as well as cutting the requirement to progress at each vigilance quest hub in half. Eight missions per hub means that you never have to stay anywhere for long and that you have less time to get sick of an area.

3) Ruthless efficiency: Using past experience, I only pick the easy quests now. (For my wizard in particular this means, anything that requires me to AoE packs of relatively weak mobs is good, while tough single mobs are a bit of a pain.) If a bad bunch is up, I'll just log off and try again later. It makes the difference between a fun half hour romp and spending lots of time dying and running back to where I got defeated.
Posted by Shintar at 22:02 No comments: