Things to Love about Neverwinter

I feel like I've been ragging on the game a bit lately, what with the pay-to-win talk and the issues I've had with the Elemental Evil module. Obviously I wouldn't still be playing if I didn't enjoy it though. So, here are three things that I like about Neverwinter:

1) For all the pay-to-win problems it has with gear and competitive gameplay, the game is very generous to the casual player. All the actual content is completely free, and if you don't care that other people are having an easier time with it because they paid for advantages, you can do pretty much everything in the game without ever paying for anything.

2) You don't have to be a D&D nut (I'm not, really) to appreciate the depth of the setting and a story that takes itself seriously (even if some of the store mounts are very silly). I kind of feel like it's not considered "cool" anymore for an MMO to take itself seriously; it's supposed to be all about the pop culture references and in-jokes, but personally I appreciate a slightly more serious approach (without falling into the trap of having everything be dark and edgy instead). Neverwinter gets this just right in my opinion. 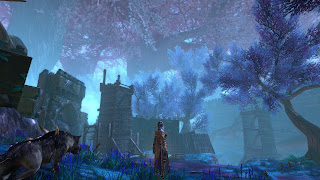 3) While the game's graphics style is fairly generic (a layman might easily confuse a screenshot from Neverwinter with one from a number of other fantasy MMOs), I do really like its art and animations. When I rolled up my first character, a rogue, I instantly fell in love with the way she was wildly slashing at the shadows with every move, and I was jealous of the sleek beauty of my pet tank's panther companion. I like that my cleric's gear actually looks useful and that there are no chainmail bikinis to be found. Even something as simple as just watching my character ride around on her mount still fills me with happiness.
Posted by Shintar at 20:09