I don't have a video or a screenshot showing the UI and achievement of it because my Nvidia share feature decided to act up again, but this past week, my guild cleared Castle Never in a full guild run for the first time! Unfortunately all I got is this screenshot of Orcus quickly disintegrating as Neverwinter mobs and bosses are wont to do. 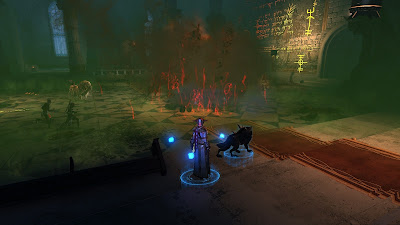 We had tried Castle Never only once before and made it up to the last boss back then, but he just one-shot our tank at the start of the fight, every time, so that we could not get any further. This time things went much better, apparently due to the boss's damage having received a heavy nerf in the meantime.

I was my usual useless self and died a lot (if I did any buffing, there are no numbers to prove it), but even I managed to survive the final attempt, which was at least something.
Posted by Shintar at 21:08