I've previously mocked the strange way in which Neverwinter loads its graphics assets on the character selection screen, but lately it's started to affect my in-game experience as well. I'm wondering if I cranked up the graphics settings a bit too high when I got my new PC?

It's at its most annoying when it comes to the user interface, as certain windows will load as transparent initially, making it really hard to find the right icons and buttons until the background loads about a minute later. But it's even more noticeable in my surroundings with things like trees, which will initially appear as bizarre polygonal crystal formations until their actual "tree skin" appears. 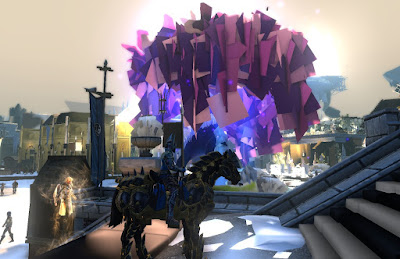 If anyone's got any suggestions as for what causes this, I'd be happy to hear them. It's actually gotten a lot better again as of late, so maybe it was a temporary server-side issue more than anything related to my PC or game settings, but I still wanted to get this out there anyway.
Posted by Shintar at 21:02