I've previously written about how Neverwinter's class and race quests are a kind of under-appreciated feature, and while levelling my warlock I was fascinated to see how Cryptic had initially iterated on the concept before abandoning it. You see, unlike the other classes, the Scourge Warlock doesn't have to hunt down quest givers in the middle of nowhere with nothing but a letter as a hint: They get their very own warlock friend hanging out in Protector's Enclave, making it much harder to miss her quests. 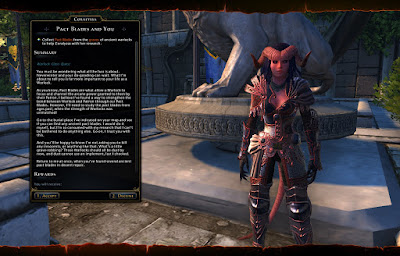 These also felt much more condensed than the chains for other classes, with a lot of them pouring in quickly during my warlock's early levels, and the whole chain coming to a conclusion as early as level 30. The finale was pretty epic as well, with my warlock descending to the nine hells to meet her patron and being told that her tiefling "mentor" had a debt with the demon that would have some dire results for her unless you were willing to pick up the tab. I took the "nice" option and saved her, but I wonder what happens if you sell her out...
Posted by Shintar at 22:40