You wouldn't be able to tell from the below image because nobody bothered to update the decorations in the stronghold, so they still have the number seven on them.

Also, the random text on this screenshot is there because for some reason my in-game screenshot functionality stopped working, so I had to use an external programme which doesn't automatically hide certain pieces of text. Such is life with Cryptic - they mean well and some of their content is very fun, but everything's always a bit of a mess. 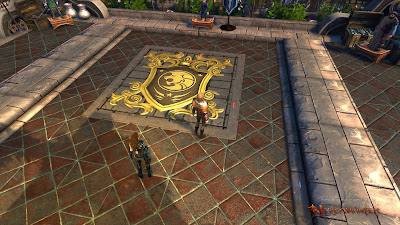 In the Protector's Garden they took away the number on the floor and just replaced it with a lion logo. I also didn't see any numbered banners there - I guess that should future-proof the celebrations against forgetful developers at least.

I had misunderstood part of the post about the levelling revamp by the way and it's not live yet. In fact we don't have a date yet, but it's probably going to be in a few weeks.