My pet tank's enthusiasm for working on our guild stronghold has been invigorated lately, and as the only thing that we're missing to progress to the next stage right now is a bunch of influence, he's been pulling people from our SWTOR raid team into Neverwinter to make them farm for us (as it has a limit of 400 per character per day). Talk about peer pressure when it's your raid leader who asks you to do something like that!

They don't even have to do much though, just log in, go to the stronghold and join the group; credit can largely be "mooched", even from quite a distance. It's been kind of nice because I've never seen our guild stronghold this full before; we were actually running heroic encounters with a full five-man group sometimes. Everything is more fun with friends. 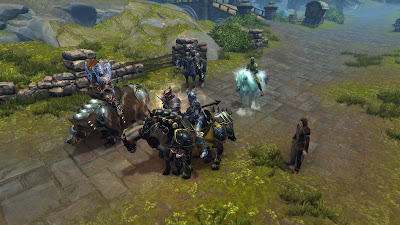