One of the things that intrigued me enough to get back into Neverwinter was mention of a revamped early levelling experience. In hindsight I had already read about plans for that back in July last year; I'd just forgotten about it again after more or less moving on from the game.

So I went ahead and created a new great weapon fighter barbarian of the one free-to-play race I didn't have yet - wood elf, apparently (this game has too many sub-species of elves) - and levelled her from one to ten.

And... I quite liked it! In terms of functionality and major plot points, the tutorial is largely unchanged, but it now makes for a much smoother continuation from the intro cinematic. I always thought it was a bit odd that after you witness the city under attack, the game then introduced your character as a shipwreck survivor (?!), with the only vague connection to the cinematic being a flash of memory indicating that your ship was sunk by the same dracolich that's also attacking the city. Then you fight your way into Neverwinter itself and... everything is peachy keen inside. 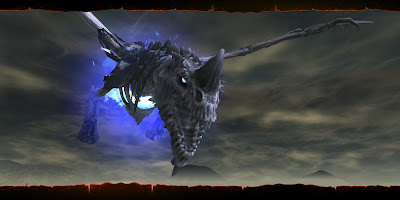 In the new version, you willingly join the battle to defend the city and even assist Makos with bringing down the dracolich. You also meet Celeste early on. When you get into the city, there is still fighting going on, with the Nashers having used the distraction to steal the crown, and only after you re-emerge from the vaults do you see that things have calmed down.

What does intrigue me is the fate of Private Wilfred though, who used to be the friendly NPC guiding you through the tutorial instead of Makos, just to die by Valindra's hand five minutes later. In the new version he's inside the city and lends you a horse at Sergeant Knox' command but doesn't speak. Has the timeline been altered to result in his survival? Or is he just doomed to die at a later point now, like the protagonist's fiancée in the 2002 version of The Time Machine? I kind of want to find out.
Posted by Shintar at 23:58