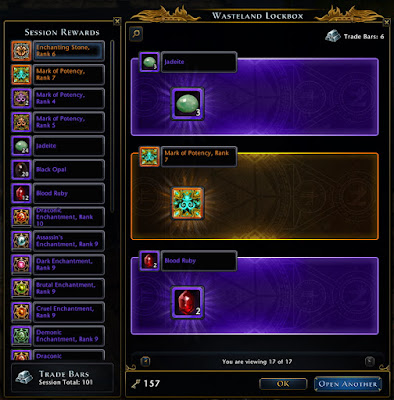 Unfortunately this UI change was already the most exciting thing about the whole experience. I complained about Neverwinter's lockbox contents being largely useless in the past, but I vaguely recall that they were at least a little more varied back then, including items like gear pieces, fashion etc. This time around I found that the drops were brutally utilitarian - which is the opposite of useless I guess, but boring. Aside from a single companion, everything else in those 177 boxes was either a refinement stone or an enchantment. For a system that's supposed to entice people with "surprise mechanics", I've got to say that's remarkably uninspired.
Posted by Shintar at 17:38