Path of the Fallen Impressions

Because the new module didn't quite offer enough naming confusion yet, the new campaign coming with Avernus is called "Path of the Fallen". We finally started it this afternoon.

Having just spent days swoop racing in SWTOR, I was amused to be confronted with another racing mechanic, as characters are given an "infernal machine" to race across the wastelands of Avernus. 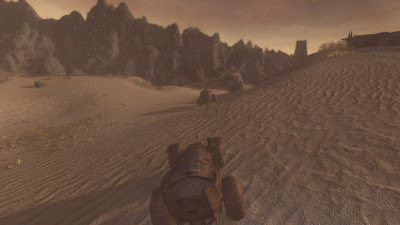 One of the machine's abilities is to "listen to the radio" (or whatever it's called in D&D terms). My husband told me that hearing devils talk about politics was vaguely amusing, but for me even trying to use that ability managed to crash the entire game every single time (because Cryptic), so I've missed out so far.

The mobs are pretty tough. The recommended item level is another 1k higher than the (already high) recommendation to start Infernal Descent, and it was very noticeable. Even though we were doing the quests with a group of three who all had higher than the recommended item level, we were downed a few times (though this mostly happened when we foolishly allowed ourselves to be split up).
Posted by Shintar at 23:48