"Where the hell do I get more artifacts?" is a question that has been on my mind ever since they added all those secondary artifact slots. I've never seen one drop in the world, and I certainly didn't want to start opening lockboxes in hopes of getting one. Eventually I gave in and bought a couple of green ones from another player, because having multiple empty gear slots felt embarrassing.

As it turns out, apparently there's been a quest in the game for a while, given by the rugged drow at the back of the inn in Caer-Konig, which rewards you with an artifact for your class. Unlocking this quest just requires you to get a second alt to Icewind Dale, which I'd never bothered to do despite of having multiple max-level alts. The artifact you get from this quest can then be claimed from a vendor on all of your alts! So if you do it with three alts of different classes, they can all have three different artifacts.

Cryptic added a quest to direct you towards this source of gear only in a recent patch, but I'm really glad they did. Now I just have to get my pet tank to run my alts through it - while my cleric was able to solo it, it took forever and was a serious pain in the arse. (Beating that beholder at the end took me half an hour.) 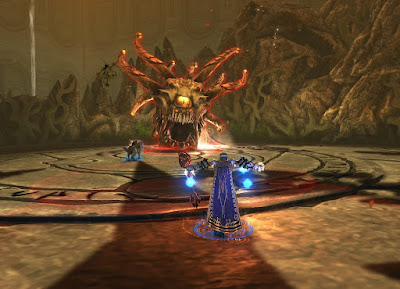