Since my pet tank and I finally managed to unlock the Well of Dragons dailies, we've been doing them whenever we can, in order to work on our campaign progression. I haven't been impressed. 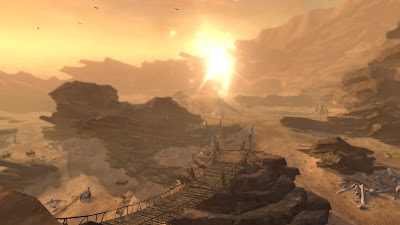 Up until Tyranny of Dragons, I felt that every new campaign was an improvement or at least a fresh new take on the way the game does dailies. But the Well of Dragons... meh.

Scenery-wise it feels like a rehashed Dread Ring with dragons instead of zombies, coloured brown instead of grey. The dailies can take freaking forever if you happen to get a bad set, about three or four times as long as a round of Dread Ring, and the heroic encounters don't seem to draw much interest.

I wonder though how much of this is the fault of Elemental Evil's level scaling and increase in difficulty. After all, I used to love Icewind Dale, but since the level increase questing there has been pretty damn tedious as well.
Posted by Shintar at 21:51