I was never really playing when the Summer Festival came around before, so I came back from a week-long holiday to be confronted with the start of this (to me) new event. Unlike most events in Neverwinter, it actually has a whole map dedicated to it (even if it's not very large).

The activities on offer there consist of silly fun like throwing water balloons at people, herding chickens or picking flowers. It's quite nice to enjoy more non-violent tasks in an MMO for a change, though there is also the option to kill trolls and kobolds for those who are so inclined. 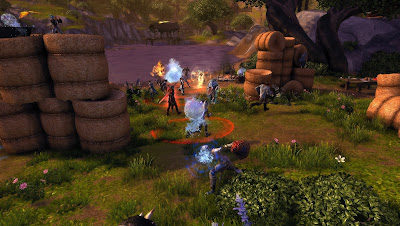 The only downside in my opinion is that most of the events are tied to one of those 15-minute long "contests", which means that doing the daily quest to participate in three different activities can take up to three quarters of an hour. And while throwing water balloons at people is somewhat fun, it's not necessarily fun for that long.

As I'm not interested in any of the rewards, I don't think that I'll be coming back repeatedly, but it's nice to have seen the thing at least.
Posted by Shintar at 16:07